Modelmakers specialise in producing fibreglass models in all forms, shapes and sizes. From the weird and wonderful to the plain and practical, we can create strong, lightweight forms to any specifications you care to supply. Furthermore, we can design and build the whole project from scratch, even if you have got just a rough idea of what you need. The dragon below, for example, evolved from a brief that simply said "we need a purple dragon". 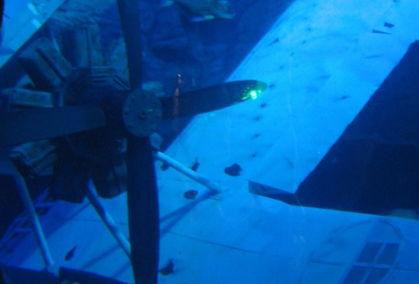 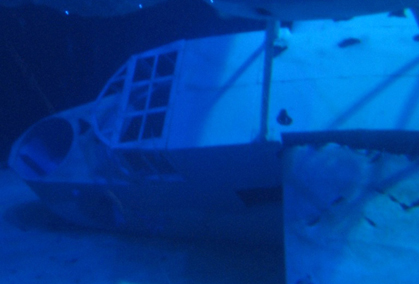 Replica of Vintage Aircraft When the National Marine Aquarium at Plymouth decided they wanted an unusual display for their huge sea water tank, they avoided the obvious route of a sunken ship and went instead for this wrecked seaplane. It’s actually a fibreglass replica of a crashed World War 2 “Vickers Supermarine Walrus”. At 12 metres long and with a 14 metre wing span it was one of the biggest projects we had ever undertaken and one of the most technically demanding. To start with it had to be hoisted into the building (in sections) through a small door three stories up. Then it would need to be assembled by divers at depths of up to 9 metres. And on top of all this it had to be structurally stable and durable enough to last many years under water. Restricted viewing lines into the tank made it a difficult project to photograph in full, but you can see more images click here. 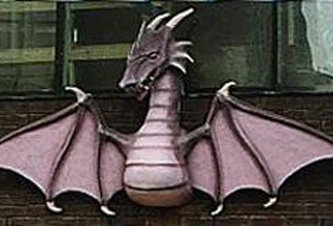 Purple Dragon From initial concept sketches to final completion, this charismatic creature was developed from a brief that simply asked for "a purple dragon". To make him even more interesting we gave him eyes that light up and the ability to breathe smoke. 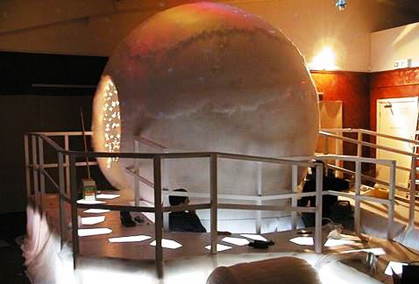 Snowball Xmas Grotto A magical ice path (that lit up as you walked) led to a hollow, 3 metre diameter snowball to meet Santa. The whole thing was covered in fake snow and surrounded by a forest of Christmas trees so we couldn’t really get a photograph of the final effect. 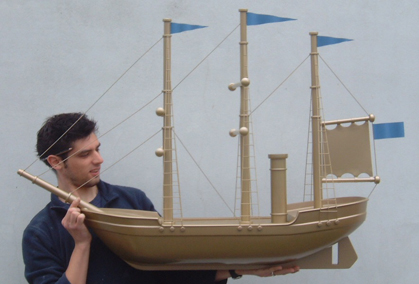 Terra Nova Made as a centrepiece for a national garden show display, this version of Captain Scott’s famous ship was actually a copy of a brass weathervane that sits on top of a commemorative clock tower in an award winning Cardiff park. 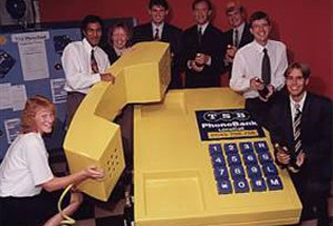 Giant Yellow Phone This was one of a pair of identical six feet long phones made for a national Launch. Big, bright (and very yellow), they helped create striking photo opportunities at several press events around the country. 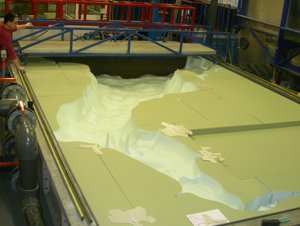 Commissioned by Cardiff University’s Engineering Department, this 6 metre x 4 metre fibreglass model of the River Severn Estuary and Bristol Channel river beds was a very technically demanding job, not just because of the huge volume of complex data involved but also because of the sheer size of the project.

Comprising several large sections that bolted together, it had to be an accurate representation of the riverbed contours (at an exaggerated vertical scale) because it was being used for physical experimentation in a major research program on tidal power generation. 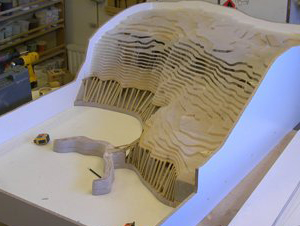 How We Made It The first stage was to create a “mirrored” negative (upside down and back to front) version of the river bed contours all the way from Gloucester, down the Bristol Channel as far as the open sea. This comprised six major sections and several smaller, infill sections. These contours were made from laser cut acrylic layers supported on an MDF substructure, all fixed onto a structural base board with upstanding sidewalls. To construct the accurate depths and contours we had to create our own CAD masterplan using a combination of traditional Admiralty Charts, CAD contour maps, reams of numbers giving spot depths, and numerous sections through the river bed at key areas. 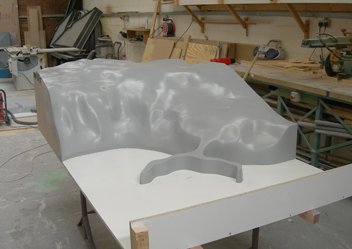 Once the basic structures of the moulds were built, the contours then had to be blended into a smooth continuous “land-form” using various filling techniques.

At the same time great care had to be taken to ensure the contours matched perfectly across the joins between the sections.

The contours then had to be sealed and “polished” to a fine finish so that the fiberglass forms would come away cleanly from the moulds once they had cured. 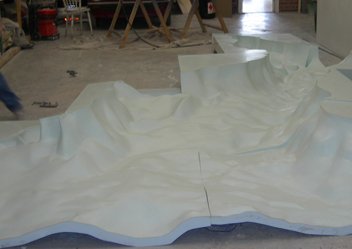 The final stage was to layer up resin and fiberglass matting into the moulds, starting with the “gelcoat” layer (which is in effect the top layer and is the visible finished colour) and then several more layers of resin and matting to build up the structural integrity.

The fibreglass sections were then eased out of the moulds and flipped the right way up, ready to be joined together on to a structural sub-frame which supported them all at the right height. The image shows the sections just after they have come out of the moulds. They had been loosely assembled on the floor to check for fit.
Need a professionally made model? Contact us now
Architectural Models Exhibition Models Industrial Models and so much more... View our Gallery >
"Steven’s studio is a pleasure to work with. He does excellent work and he always delivers on time. I would be happy to recommend him to anyone.” Jonathan Adams (Architect for Wales Millennium Centre) Capita Percy Thomas "Thanks very much to all the team for producing such an excellent model, the attention to detail is fantastic. I look forward to working with you again.” Carolyn Merrifield
Downs Merrifield Architects "Modelmakers’ models are of fantastic quality, and allow us to sell our properties more effectively from plan. Not only are the team courteous and helpful, they produce the goods on time, and importantly are competitively priced.” Holly Finer
Redrow Homes "The attention to detail and quality is exemplary and we would just like to thank you and your team for the care and effort you’ve put in. As a practice we will definitely bear you in mind if ever we are requiring models built in the future.” Kelvin Naidoo
Bryden Wood Associates
Architects and Designers for Manufacture See all testimonials
Some of our clients